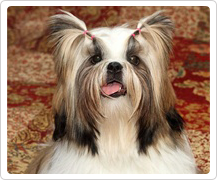 The present form of Shih Tzu dog is believed to be a breed of Pekingese and Lhasa Apso. It has its roots in Tibet, where it enjoyed a status of reverence in Buddhism. This pet breed is also known by other names such as ‘The Lion Dog’ or the ‘Chinese Lion Dog’.

Shih Tzu is a small pet and is about 25 cm high by the shoulders. As per its small size it weighs around 4-7 kg. The pronounced stop or the depression formed at the joint of muzzle and forehead, domed skull and undershot bite make the characteristic look of the Tzu.

The texture of hair of Shih Tzu is almost similar to that of the human hair. Black, red, beige and white are the most common upper coat colors of the Tzu.

As a watchdog it is not preferable to deploy Shih Tzu. It is of friendly nature and mingles very well with family and other pet of the house. It does not bark much.

There are lots of adjectives that can be used to describe the character of Shih Tzu. Some of the character highlights of this pet are: independent, intelligent, dignified, lovable, affectionate, sociable, and cheerful.

Shih Tzu makes its own fashion statement and thus its show coat must be properly maintained. It requires frequent grooming and professional maintenance once in a month or two to keep the pet in best condition. It is noteworthy that clips or bands should be used to keep hair away from eye of the pet.

Shih Tzu is of independent temperament and does not easily accept training commands. It requires a lot of patience and affection to train the pet.

The dog is your friend, you are requested for his well-being

Mr. Jagpal, an avid animal lover from a young age, who has a passion for all kinds of animal, set out to follow his dream of being a dog breeder.