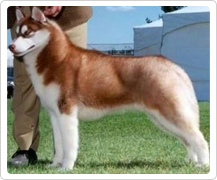 The Siberian Husky is a popular dog breed. It has its roots in Eastern Siberia, where for thousands of years it was used as a sled dog. Around one hundred year ago, it was imported to Alaska, where it attracted attention as a strong, dominating and loyal pet breed.

Furry ears with almost round skull and eyes of almond shape make the characteristic look of the Siberian Husky. It is 50cm to 60 cm tall by shoulders and weighs around 20kg to 30 kg.

The Siberian Husky has evolved and survived in the extreme Siberian and Alaskan weather conditions only due to its straight hair that are dense and form a rough outer coat and a smooth under coat. White, pure white, grey, copper-red and even black color Siberian Husky are quite common.

The most noticeable temperamental characteristic of the Siberian Husky is that it is clever than several other dog breeds. The Huskies are also adventurous, and stubborn. They are a poor watch dog due to their temperament of becoming friend to everyone.

The Siberian Husky is a wanderer and attaches affinity with everyone. They are full of energy and love their independence like any other domesticated animal.

At the time of the shedding, the Huskies require regular grooming and combing. Siberian Husky should be given a bat only when it is really necessary. The pet has a lifespan of 12-14 years and under proper care it remains healthy throughout.

The independent headed Huskies are also stubborn pet which make it tough to train them. However, with patience, proper training and affection, a Husky could be considerably trained.

The dog is your friend, you are requested for his well-being

Mr. Jagpal, an avid animal lover from a young age, who has a passion for all kinds of animal, set out to follow his dream of being a dog breeder.